I hope you and your family are safe and well during this difficult times.

Given everything that is happening globally, it seems a bit irreverent to be reviewing fine wines. But given that we are living in relative isolation, a decent bottle of wine at the end of the week might bring a little consolation.

Life is a Cabernet

The life of a wine taster may sound glamorous, tasting dozens of wines each week, trying to find high quality and good value wines that we are happy to recommend. But the reality is often quite different from the image.

It is always an interesting exercise when two bottles of the same wine end up in a tasting, or in tastings that are close together, as it is a chance for panel members to measure the consistency of their notes and scores. The closer the scores, the happier the panel. (Read More)

In the global wine market, Western Australian wines are positively cheap, when quality is factored in. In an effort to lift the profile internationally, a number of producers have released, or are planning to release limited edition Reserve wines at a higher price point.

There are some varieties that are just that little bit more special to taste than others, and Cabernet Sauvignon, either alone or blended is one of those. Part of the attraction is that Australia (and Western Australia in particular) makes Cabernet-based wines that are the equal of any in the world when assessed for quality as well as value, so the quality of our tastings can be quite high.

Margaret River has a reputation for producing some of the greatest Cabernets in Australia, if not the world. So it came as no surprise to the panel that the 2016 Cape Mentelle Cabernet is a truly outstanding wine.

In a line-up of high quality wines, the Vasse Felix Cabernet really stood out. A wine with great poise and balance that has a very premium feel about it.

At the more affordable end of the spectrum, the Thorn Clarke Sandpiper is an excellent effort, with delicious fruit and supple winemaking.

In a line-up of fine wines, three really impressed the panel. Each wine took a different approach in expressing its personality, but in each case, the results were outstanding.

Over time, their personalities will gradually express themselves allowing the patient to determine the final pecking order, but from a value perspective the Leeuwin Estate is the pick.

It was no surprise that the wines from Victory Point, Higher Planes and Fraser Gallop shone in this tasting. What did surprise though, was that these premium Margaret River Cabernets can all be picked up for under $40 a bottle.

For more than 100 years, Coonawarra has been famous for its red wines, particularly those made with Cabernet Sauvignon. The region is defined by the strip of Terra Rossa soil that sits over limestone. 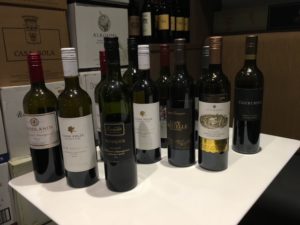 When it comes to selecting a dozen or so of the state’s best Cabernets to put into a tasting like this, we are blessed for choice, with several well-established wineries producing some of the best Cabernet-based wines in Australia (and, perhaps, the world). There is also a new breed of wineries that are producing great wines, making the choice even more difficult.

Whilst the panel was expecting the strong showing from the West Australian wines, a highlight of the tasting was a Cabernet from Langhorne Creek. The Authur’s Reserve from Lake Breeze impressed with its dense, high-quality fruit that maintained elegance despite its power. Not to be outdone, the Cape Mentelle continues to impress. This is an outstanding wine.

In Western Australia, the majority of wineries make their Cabernet/Merlot blends in a softer, more approachable style, that is suited for earlier consumption. Their more serious (and expensive) wine, however, is labelled as straight Cabernet.

There have been some changes at Penley Estate over the last few years. None have been more important than the appointment of the talented Kate Goodman to lead the winemaking, following the retirement of Kim Tolley. The packaging has also been refreshed, complementing the changes in the winery.

I recently wrote about the current range of Shiraz released by Cherubino and this time it was the Cabernets that shone. These are very fine, elegant wines that will be extremely long lived. I left the bottles on my tasting bench and they continued to improve for 4-5 days, and were still in excellent condition after a week!

Jeff Burch, proprietor of Burch Family Wines (Howard Park, Madfish etc), recently hosted a tasting of a cross-section of 2005 Red Bordeaux, in conjunction with Sommeliers Australia. The nine wines came from a number of the major communes, in an effort to demonstrate the stylistic differences that can be expressed across the region.

A decade ago, the wines from Woodside Valley Estate started to make a real impact. I reviewed the 2004 Baudin (Cabernet Sauvignon) very well and have several bottles in my cellar. They also supplied fruit to other wineries in the region.

Wynns Black Label Cabernet is one of the most important wines in Australia’s wine history. A wine that has formed the backbone of many Australian cellars for over 50 years. According to James Halliday, the first Wynns Cabernet was released in 1954!

Over the last few weeks, I have written about the fantastic Cabernets from Xanadu and Houghton, ranking both amongst the best Cabernets from Western Australia. The only trouble is that these were not blind tastings, so label bias is a factor.

Houghton must surely be the most important winery in the history of Western Australia. Established in 1836, Houghton set the standard for Western Australian wines. Much of Houghton’s reputation can be credited to the skill and passion of Jack Mann, a brilliant winemaker who has made numerous remarkable wines over a number of decades.

It is the Cabernets of Xanadu that have really made people pay attention, winning multiple trophies at capital city and national wine shows. The 2013 Xanadu Cabernet, for example, was awarded the best Cabernet Sauvignon trophy at the 2015 National Wine Show in Canberra.

Margaret River is synonymous with high quality Cabernet based wines, so it should come as no surprise that several of the wines reviewed for this tasting scored very well. What did surprise though, was just how good the two wines from Vasse Felix were.

The wines under the Streicker/Clairault labels continue to impress. In this tasting it was the entry level Cabernet from Clairault that made the biggest impact. Whilst the Estate and Cellar-Release are both impressive, it was the value of the Margaret River Cabernet that made me pay attention.

I have noticed an interesting trend developing in my cellar of late. I love to buy Shiraz, but I tend to open Cabernet to drink.

Western Australia and Margaret River in particular, has had a string of excellent vintages stretching back to 2007. Whilst there have been some year-to-year variations, the consistency has been remarkable. The question is whether there is one year in particular that is even better than the others?

Lindeman’s has a proud history of producing some of the best Cabernet based wines in the country from the famous Coonawarra region of South Australia. In the 1980s and 1990s, no cellar would be complete without a cross-section of these wines (and the wines from Wynns).

The life of a wine writer is not as glamorous as you might imagine. Tasting through 20 Sauvignon Blancs for example, is difficult due to the high acidity. Many of the panel tastings that I hold have numerous commercially sound, but unexciting wines, with just a few interesting/high-quality wines interspersed to justify the time taken to try them. Then there is the spit buckets…

Vintage in Focus by Barry Weinman

There were a number of highlights with this tasting.

The Cape Mentelle Cabernet is nothing short of spectacular, but it comes with a caveat. This is not a wine for the average drinker. It is very shy and tight, requiring coaxing to see its potential. For the patient few, with appropriate cellars, this wine will be spectacular in two decades’ time.

The big surprise here was from Grace Farm. This is not a winery that I am familiar with, but the wine is excellent. The vineyards are situated in Wilyabrub, and the vines planted in 2006.

I must admit to getting a little confused by the wines released by Larry Cherubino. There is no question about quality; it is the vast array of wines that he produces that is hard to keep up with.

The Redman family are pioneers of the Coonawarra region, having been involved in growing grapes and making wine for almost a century.

While Western Australian Cabernets made up the bulk of the wines in this tasting, Coonawarra was not to be outdone, with the Wynns Alex 88 making a real statement.

This is the first single vineyard Wynns that I can remember, and it certainly made me sit up and pay attention.

Houghton’s place in the history of viticulture in Western Australia is unique. Soon to celebrate their 180th anniversary, Houghton dates back to the very early days of settlement in the state.

This tasting offered up an interesting cross-section of cabernets from around the globe. I was pleased to see that the styles of the wines reviewed accurately reflected the region in which they were produced. This really added interest to the tasting, as the wines reflected the terrior in which the grapes were grown.

The dream run of vintages continues in the south west of Western Australia and the wines reviewed below deliver on the potential.

Everyone knows that Margaret River makes Western Australia’s (and possibly Australia’s) best cabernet based wines.  Right?  They certainly make the most high quality cabernets of any region in Australia.  The region also produces the highest number of quality wines as a percentage of the total volume produced.

One of the local wine groups recently hosted a tasting of many of the best 2010 cabernets from Margaret River. This presented a wonderful opportunity to look through a very strong line up.

Margaret River has been blessed with many good or great vintages starting in 2007 and continuing to 2013. 2010 is considered by many to be one of the best!

Margaret River or Coonawarra? I often ask myself that question when I am purchasing or opening cabernet based wines. Ten years ago, I would also have included Bordeaux in the equation, but the tremendous prices being charged for decent Claret makes Bordeaux an unrealistic option for me.

Cabernet based wines must surely be the King of wines. Powerful, structured and majestic, their ability to age is second to none when it comes to red wine. This power was certainly on display during this tasting, though the expression varied. In some, the power was overt, while in others, there was latent power wrapped up in a cocoon of silky fruit.

A large bracket of cabernet based wines makes for a tiring tasting. The firm tannins and relatively reserved fruit present a challenge. This was typified by the wines from Moss Wood and Cape Mentelle. Both are obviously high quality, though they really need several (many) years in the cellar to show their best.

A strong line up of wines, though there was some diversity to the styles, reflecting the different locations in which the grapes were grown.